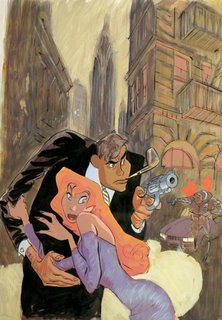 Tell me a little bit about yourself, about your life? Where did you go to school, and what classes did you study? What helped prepare you to become the artist that you are today?

Oh yes, school... my formative years... Quite embarrassing. Well, let's say I am a passion driven guy but also a bit of a "dilettante".

What helps to become what I am? Meeting other artists, swapping opinions. Each and every of my script writers taught me a lot. Even those with whom I didn't get along finally. The huge slaps in your face teach you good lessons too... I remember of a time when Serge Letendre offered me "Siloé" but it didn't take long to both of us to understand that this project was far beyond my abilities of the time. At the time, Serge was working with Christian Rossi on a book called "La Gloire d'Hera" I saw some preparatory sketches of Rossi and soon realized that there was still a long road to go....After that, you get back to work seriously or you open a pizzeria. BTW, I make excellent pizzas... Besides meeting people and view exchanges, the reading of "Les entretiens Truffaut/Hitchcock" was also essential.

How do you go about designing a character, and what goes through your mind, from start to end?

It's also the quality of the script, the accuracy of the dialogues.... This says almost everything about the characters, their attitudes, their expressions... From there, I seek until there is no more so that I can tell to myself: Ah ! This is it... and it can take some time. Quite normal since you'll spend several years in their company.

What do you think really helps you out in designing a character?

Time, research, sketches... I even made some small statues in 3D (clay) to catch the essence of a character. I also used some kind of bible with photos of support actors long gone or quite dead.

According to my close friends... everything deserves to be shown (er...). I think they are sincere but... it's a bit exaggerated !!!! "Les Aberrants", (just one book fortunately!), it's total crap! And I am being sincere too!

What are some of the things that you have worked on?

Not much beside comic books... Just a little work for the wonderful world of advertisement. I even received an award at Angoulême for my work for Pfizer laboratories (with Etienne Simon): the Alph' Art in communication. I also had a brief stint in animation but that didn't get far. I recently turned down a proposition to focus on Indeth. Noting in Motion Pictures even if there was a vague project for Green Manor (with Alain Chabat) but I truly think that Indeh could strongly interested some studios. It had such a good story and brilliant characters...

Is there a character design you have done that you are most proud of?

All the characters in the three volumes of Green Manor (story of Fabien Vehlmann). The main difficulty resided in the very form of the série ( 16 short stories of 7 pages). In this framework, giving enough consistency to the characters so they get credible since the very first "boxes" was a real challenge. ..especially when you known that none would live more than 7 pages. A constraint that generates much frustration as you can easily guess. In the other hand, it also allowed me to explore several graphic possibilities: the first stories clearly belongs to what is called here "the school of Marcinelle" while the last tend towards semi realism.

With Indeh (scenario of Philippe Nihoul) I am at last back to long and epic story telling. I have a hell of a time to define Jim and the old Hashkee but the script was well worth a flawless frankly cast of characters. Today, I adore them both. What was the most difficult was to further push semi realism without freezing the characters as if they were made of stone.

What are you working on now? (If you can tell us)

Indeh, for Dargaud publishing and this for quite a long time to go, I am afraid. This is the pitch:

August 1950, Jim Sanchez, a young cop of the Apache tribal police force on Mescalero reservation picks up an old Indian in the desert. Who is he really? Where does he come from? No one knows... Why does he follow the americanized police officer, who is fairly disturb in his certainty and its peaceful family life, by the intrusion of the old warrior disturbs ? Why does he agree to tell his life to the local historian Eve Elder, embarked with Jim in a singular pilgrimage to attend the sacred Dance of the Spirits of the Mountain? During one endless night interminable, rocked by drums come another age, the old man will recall for his fascinated audience the desperate fight and the slow death of the last rebellious Apaches.

Where is the place you would like to work if you had a choice?

Who do you think are the top character designers out there?

It is indeed very personal and I don't know them all. There are the ones of which I know some of the works but whose names I don't know (a string from American illustrators that Pierre Alary made me discover). Sincerely, I am unable to answer.

How do you go about coloring the character, what type of tools or media do you use?

Scarlett Smulkovski took care with a great talent of coloring the first 2 Green Manor (computer work) was occupied with much talent of the first two volumes (by ordi). But later, I did myself (with the help of Etienne Simon). For Indeh, and with reluctance, I decided that Philippe and my own views were so strong and precise that I could not entrust it to anybody else. Etienne will lend me a serious hand, of course, but overall I will give the final blow. It is a common laughing matter but I still use an old Photoshop 5.5 and the mouse for the color work. Incredible, isn't it?

What type of things do you love to draw, and why?

Roughs, sketches and story board...The hardest thing is to get things going for good. It's like doing it over and over again. It's a sort of "Welcome to reality" thing which is most unpleasant. But, then again, what can you do?

What is your most favorite subject to draw?

What inspired you to become a Artist?

My total inability in sports, whatsoever... The lack of interest for serious studies... That left me with some spare time for "something else"... If you add to that the fact that I've never been a great reader... Becoming a comic drawer may have help me to fill some kind of lack, maybe it's my way to tell me stories...

What are some of the neat things you have learned from other artists that you have worked with or seen?

Everyone has his personal story, his own way... Day by day, we slowly forge our own opinion about this strange way of making a living... Each to his own, that's what it's all about.

What wisdom could you give us, about being a character designer? Do you have any tips you could give?

No tips, no hints ! Never ! Find your own ! Go your own way. Do what you want and what you like. But you also can simply want to draw "à la" Rossi, Giraud, Bernet, Tardi...

Since I don't speak English, the easy way is to get in touch with Philippe Nihoul (philslf@gmail.com). I also have my own blog where you can see my latest works, here:


Finally, do you have any of your art work for sell (sketchbook, prints, or anything) for people that like your work can know where and when to buy it?

but you can also contact Philippe Nihoul if you want something.

This book sounds very interesting, I'll haev to try and hunt it down and have a look.